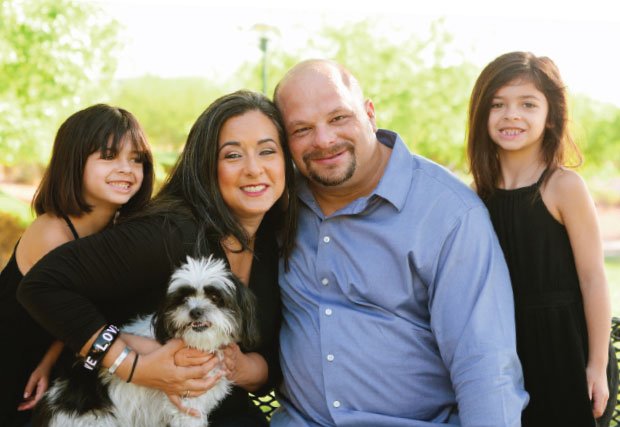 Liza is as active and happy as any other six-year-old. She loves nature, takes ice skating lessons, practices gymnastics and wants to be a florist when she grows up. Meeting her now, you would not have any idea that she has spent her whole life dealing with the effects of a rare airway condition she developed shortly after birth that required pediatric specialists at Summerlin Hospital to work for months to keep her breathing.

Alexandra and Damien still remember how relieved they felt the day they could finally bring Liza home from the hospital to join her sister Talia. The identical twin girls were born prematurely, but Liza’s health complications kept her in the NICU for three additional weeks while her sister was at home. Even before leaving the NICU, they felt concerned that Liza’s breathing didn’t sound normal. “We were watching her very closely,” recalls Alexandra. “Her breathing was labored and was so loud.”

After a visit to the pediatrician for another checkup, the staff immediately recognized that there was a problem and contacted Pediatric​ Pulmonologist Craig Nakamura, MD.

“Parents often have a good intuition, and they know when something is not right with their child. They should trust their intuition if they feel something is wrong and discuss it with their pediatrician.” – Pediatric​ Pulmonologist Craig Nakamura, MD

Early the next morning Dr. Nakamura saw Liza at his office and told the family to go directly to Summerlin Hospital, where he put Liza under general anesthesia to examine her respiratory tract. He discovered that she had a hemangioma, a benign growth of blood vessels, blocking 30 percent of her airway. Although hemangiomas are common in newborns, especially preemies, seeing them grow inside the airway is rare and many doctors mistake the symptoms for croup.

“It’s not very common. I maybe see it once a year, and hers was more severe,” explains Dr. Nakamura. “She had difficulty breathing and made a sound called stridor. We scoped her with a camera to see what was going on, and we saw this big hemangioma blocking her airway.”

To manage the growth of the hemangiomas, which also grew around Liza’s mouth and ears, she uses a topical treatment and takes a betablocker, which means going to the hospital for electrocardiograms every few months to check her heart rate for irregularities the medicine could cause. Liza’s parents and Dr. Nakamura agree that she has come a long way since that first year. For now, the medication is working and her pediatrician is hopeful that they will be able to wean her off of the medications in the future.

“I’m so fortunate that we had such good quality care,” says Alexandra. “It was life-threatening when she was first diagnosed, but we got lucky that something so serious in the beginning turned out to be manageable. Over the past six years, Liza has had tremendous progress. We’re really grateful to Dr. Nakamura and Summerlin Hospital.”