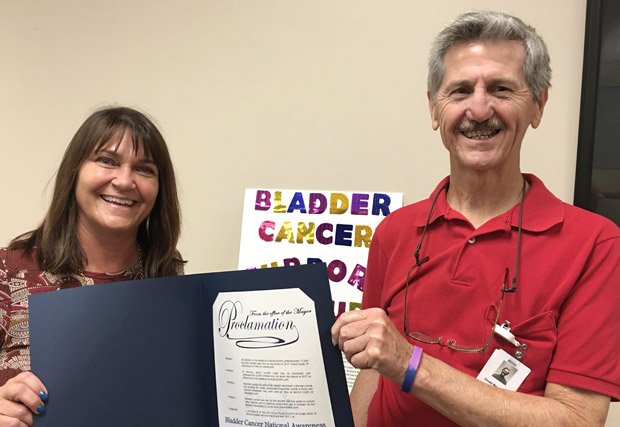 Many people know rectal bleeding is a possible sign of colorectal cancer, but fewer realize that blood in the urine can be a first sign of bladder cancer.

That was the first tip-off for Don Weinrauch, who thought excessive exercise might be the culprit, but decided a medical opinion was in order, first with his family doctor and then a specialist. His urologist ordered a CT scan and cystoscopy, and ultimately determined Don had an aggressive high-grade tumor. In April 2015, he underwent a transurethral resection of the bladder (TURBT) at Summerlin Hospital. By September 2015, another high-grade tumor had appeared and a second surgery was performed.

“I’ve learned bladder cancer, especially high-grade tumors like mine, can be very progressive and spread to other organs,” said Don. “It has a recurrence rate of 50 to 80 percent, and requires life-long surveillance. I’m grateful my urologist was cautious with my symptoms.”

Teri Koehler’s diagnosis took a very different route. In 1985, at age 23, Teri was diagnosed with a rare lumbar spinal cord tumor called a myxopapillary ependymoma. It led to spinal surgery, radiation treatment and third diagnosis of metastatic spinal cord tumors leading to more surgery and a heads up that bladder issues could be a significant concern in her future.

“Several years after my surgery in 2005, I began to have urination issues,” she explained. “Going out became stressful because I never knew when I would need a bathroom, and if I did need one, I needed it immediately.” Working with her urologist, she tried various medications, but after a time, they decided to try Botox as an outpatient procedure in the hospital. “It was during this procedure when my urologist found a tumor on my bladder wall. I had a TURBT (transurethral resection of bladder tumor) done, too, and the results showed a Ta (non-invasive), low-grade, papillary urothelial carcinoma.” The cause was most likely the radiation treatments that helped Teri survive her spinal cord tumors.

Both Teri and Don urge vigilance and awareness to others who might not know much about bladder cancer. “I want others to know bladder cancer can show a touch of blood, painful urination and other symptoms similar to a urinary tract infection (UTI),” said Teri. “Just because women are diagnosed with more UTIs doesn’t mean you are at a higher risk for cancer, but be open with your doctor about any symptoms,” she urged.

“Be proactive and seek a medical diagnosis if you experience any ‘red flag’ symptoms,” said Don. “Some bladder tumors, like mine, are very progressive and aggressive.”

Both Teri and Don require vigilant follow-up care for their bladder cancer, and the two became acquainted through an online website called Bladder Cancer Advocacy Network (BCAN). Along with their spouses, they launched the only Bladder Cancer Support Group in southern Nevada in January 2016 to provide information, education, speakers and emotional support to bladder cancer survivors, family members and other individuals.

“It’s an excellent resource,” said Ginger Fidel, RN, oncology coordinator for Summerlin Hospital. “It gives people an outlet to learn from others who have had similar experiences.”

The Bladder Cancer Support Group meets on the fourth Wednesday of each month from 6 to 7:30 p.m. at Summerlin Hospital in conference room 1A, past the cafeteria. The address is 657 N. Town Center Drive.  For more information, visit www.bladdercancernv.com.