Caring for Kids and Teens Magazine 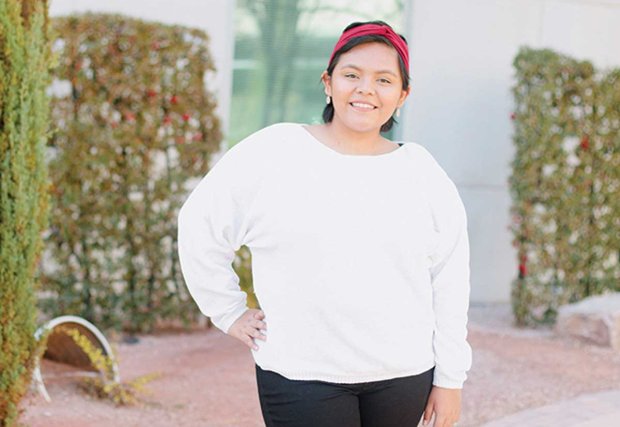 While Delilah Juarez was being treated for osteosarcoma, her creative spirit continued to soar

A shiny brass bell hangs on the wall of the sixth floor of Children’s Medical Center. Patients ring it after their last scheduled hospital treatment, often for chemotherapy. Part of its inscription reads, “My treatment’s done, this course is run and I am on my way!” Hanging beside the bell is a colorful image of a bright butterfly. It was painted by osteosarcoma survivor, Delilah Juarez, and it beautifully captures the joy that is often felt in that space. The young cancer survivor rang the bell in July 2018, but her story began nearly a year before that.

In late summer 2017, the 16-year-old’s arm hurt. It was a bit swollen, too, and her mom and dad were worried. The pain landed them in the Emergency Department and, after an X-ray, the teen’s mother, Adelina Juarez, received some unwanted news. “They told me that my daughter had a mass on her bone.”

A few days later, the young patient was diagnosed with osteosarcoma, an aggressive form of bone cancer. Just two days after that she started her first round of chemotherapy. “I was very scared,” she says. “Just hearing the word cancer, I couldn’t believe it.”

For the next 10 months, the teen was at the hospital at least two weeks every month, often more. “After my first treatment, I felt good,” she says. “I was trying to be positive and just kept telling myself that I was going to be okay.”

The Children’s Medical Center has a wide range of programs in place to help kids during their stay. The teenager was immediately drawn to a painting class held by Eliane Balsewich of Busy Bee Art Studio.

“Within her first two weeks of treatment she started making art,” says her mother. “Every Monday, she was excited to paint and I was so relieved that she had something to look forward to. I still have the first piece of art she made there.”

It wasn’t just her artistic ability that stood out.

“Delilah is amazing,” says her child life specialist. “She was always thinking about other people, even though she was going through an incredibly hard time herself. She wanted to make sure that her family was comfortable and that her siblings had things to do while they were there. She reached out to other patients to help them feel comfortable. She wanted to share her story in a way that was inspiring and helpful.”

It’s no surprise that the young girl’s Make-A-Wish® involved making other people’s lives a little brighter. The Southern Nevada Chapter helped connect her with ColourPop to launch her own makeup line – one designed to help cancer patients feel beautiful. After the launch, she used her makeup on some of the nurses and other patients. “That was a special day,” says her mom. “It was beautiful to see her wish in action. It can be a challenging place to be, but when we’re in there and we’re all together, it becomes a community.”

When Delilah rang the bell commemorating her last chemo treatment, she held a sign that she painted herself. With her many talents, there is no doubt that her future looks bright. Plus, she knows exactly where she wants life to take her.

“I want to be a child life specialist,” she says.

Support for the pediatric department

The child life team helps to coordinate activities with assistance from hospital volunteers and various community partners. In addition to painting, patients also have the opportunity to participate in the Project Imagine Arts in Medicine Program and in virtual reality programming with VR Kids. Special visitors from entertainers to costumed characters can easily brighten a patient’s day, while organizations such as Candlelighters Childhood Cancer Foundation, Nevada Childhood Cancer Foundation and the Tyler Robinson Foundation are on hand to specifically support oncology patients and their families. “These activities and events help the patient feel like a kid and they bring a sense of normalcy,” says MacLeod.